Advancement in information and communication technology (ICT) is today impacting every aspect of human lives and agriculture; the traditional economic activity for survival is no exception to that.

Until a few years ago, agricultural research and development were primarily the government’s concern, and private companies hardly entered into the sector without incentives. But today things have changed. Private entrepreneurs have started looking at it as one of the most lucrative fields.

The Agtech ecosystem is abuzz with startup activities, private investment, individual sponsorships, government support and some of the most successful and exciting innovations.

Geographical locations with dominant agricultural activities such as Southeast Asia, which produces 25% to 30% of world’s rice and 90% of the world’s palm oil, is evolving fast to harness the benefit of ICT.

The core of the transformation in Agriculture is the increasing mobile connectivity among Southeast Asian farmers, for whom a mobile phone is much more than just a talking tool.

In South-east Asian countries, the mobile connectivity is spreading fast from main cities to rural areas, and those who use basic phones are gradually upgrading themselves to smartphones.

For instance, in Indonesia in 2011 there were only 11.7 million people who used the smartphone, but the figure went four times up in three years to 44.7 million in 2014. The number of users is expected to reach 92 million in 2019, which will be one-third of the total population then.

You May Also Like To Read:?How Drones Are Transforming Agriculture Sector

Farmers constitute a good percentage of the population who use mobile technology. In countries like Laos, Cambodia and Vietnam more than half of the country’s population engage in agricultural activities. 35% people in Indonesia, Philippines and Thailand work either on farmlands or in other allied sectors. Their families are dependent on farm produce. Mobile phones are transforming lives of millions of people who heavily rely on agriculture.

From word of mouth to mobile applications

Before the innovation and use of mobile phones, crowdsourcing or sharing of information used to be done through either word of mouth or informal conversation with some local experts. Along with that, local cooperative societies also used to pass on the latest agriculture information to farmers either through direct contact or through radio or television.

But mobile phones changed everything. In the initial stage, various governments have started agriculture helplines which a farmer can call to gather information related to the nature of the soil, variety of seeds, use of fertilisers, and so on. The mobile phone connects farmers with agricultural scientists and experts who can sit miles away and provide guidance to farmers.

Along with the helplines, another mode to communicate with farmers is through SMS communication, or text alerts on phones that offer basic facilities. Indonesian coconut growers get weather updates, farming techniques, crop quality, etc. on their mobile under a piloting project by consumer goods giant Unilever in collaboration with Vodafone.

Though the helpline and messaging services still exist with substantial popularity, as mobile phones are getting upgraded from simply talking devices to smartphones, more innovations are being brought closer to farmers.

Besides various agricultural websites and radio programs, new mobile applications have been created which can educate farmers about farming methods and the need to farm different varieties of crops.

Communication technology plays a key role in the entire agricultural value chain from pre-farming preparations to post farming activities. Farmers have information on their fingertips about everything they want to know.

Today, drones are used to conduct the geospatial mapping of irrigation zones. Data gathered with this technique is disseminated to farmers and other stakeholders through smartphone applications. Similarly, robots and computer applications are used for weeding and controlling crop diseases.

During the season, a farmer can monitor the crop requirement and their growth sitting at home through the use of a mobile application. i-Grow is one such smartphone application in Indonesia, which helps people do farming without actually doing plow work or sowing the seeds.

With this novel concept, the company invites people to invest in a variety of seeds depending on his budget. These seeds are then handed over to skilled farmers who have collaborated with i-Grow. These farmers sow the seeds in fields and you can monitor every farming activity – from the stage of sowing seeds till the harvesting of crops ? sitting at home. Harvested crops are sold to i-Grow partner firms and profit is shared among various stakeholders. The company claims that one-time investment of $1213 in peanuts can give a financial return of 9-13% in six months.

CGIAR, a global research partnership for a food-secure future, runs a program called Climate Smart Agriculture Advisory Service (CSAAS) in South and Southeast Asia. Under this program, the company tries to use climate-smart agriculture (CSA) technologies ? an approach to achieve farming priorities amidst climate change ? in the production of rice, maize and wheat.

The company offers a smartphone application, Rice Crop Manager (RCM), which collects location-specific historical climate data, planting seasons of various crops, weather forecasts, and various other crucial information and passes this on to the farmers who use this application. Farmers from countries like India, Bangladesh, Vietnam and the Philippines are getting the benefit of this application.

8Villages, a local tech startup, helps farmers connect with agriculture experts in local universities through either SMS or video conferencing to get updates and information regarding soil, climate, pest control, and crop disease.

Interestingly, mobile service providers have come up with various price packages to provide information depending on specialised farming requirement and farmers can subscribe these packages depending on their needs.

You May Also Like To Read:?Innovation In agriculture Will Drive Food Security

Malaysia has witnessed a jump in mobile applications for farming developed either within the country or from other countries in the past few years. Some of these applications are FarmWizard, Uniform, Version Agri360, iCrropTrak.

In the Philippines, the government is collecting data and images of agricultural fields with the help of a microsatellite, Diwata-1. Agriculture scientists analyze this data and converts it into simple and useful information to disseminate among farmers on their mobile phones or through other means.

Another company with applications that can assist farming with scientific information is ScoutPro, which helps farmers tackle issues related to weeds, insects, disease, and other problems with the help of smartphone-based applications. Though it’s a US-based startup, it targets customers everywhere on the globe.

Use of technology ensures agricultural growth and minimizes dependence on natural resources such as favorable climatic conditions. A majority of farmers in Southeast Asia have small landholding and climatic variations impact them the most.

Most farmers are illiterate and have traditionally not had access to technological innovations, but mobile phones have made it possible for them to access information from their homes. They have also helped them get the information in a simple way that is easy for them to understand.

This increase in access to information will lead to an increase in farm production, which can give a chain of positive results such as improvement in the economic situation of farmers due to high earning, decrease in poverty level as well as economic disparity, better standard of life and consequently a high GDP of the country. The biggest gain of all is the improvement in food security for everyone.

Brian Powell
Brian Powell is the Founder & CEO of i1P2P. His vision is to provide the world?s 500 million smallholder farmers with the resources they need, when and where they want them, in a format they can readily use. Brian plans to do this by developing a platform of seventeen smartphone apps specifically designed for smallholders to use without special training or instruction.
Recent Posts 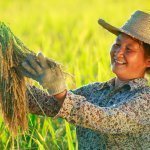 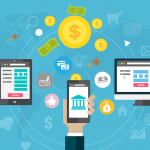